When I was studying English at Nebraska Wesleyan University, I was blessed to take classes from Bill Kloefkorn, who was the Nebraska State Poet.  I had never had any interest in poetry before Bill's classes, and I was captivated by his infectious sense of humor and his accessible poetry that offered wonderful insights into being human. I even wrote some poems under Bill's coaching that won an award at NWU.

While I continued to follow the work of Bill Kloefkorn, and then fellow-student and now Nebraska State Poet Twyla Hansen, I haven't done much with poetry since I was in college. So I was excited to see that the Type Rider II:  Tandem Poetry tour would be traveling through Nebraska last month. Maya and Amy rode a tandem bicycle from Boulder, CO to Beloit, WI to dedicate Little Free Libraries and inspire more interest in poetry and creativity along the way. 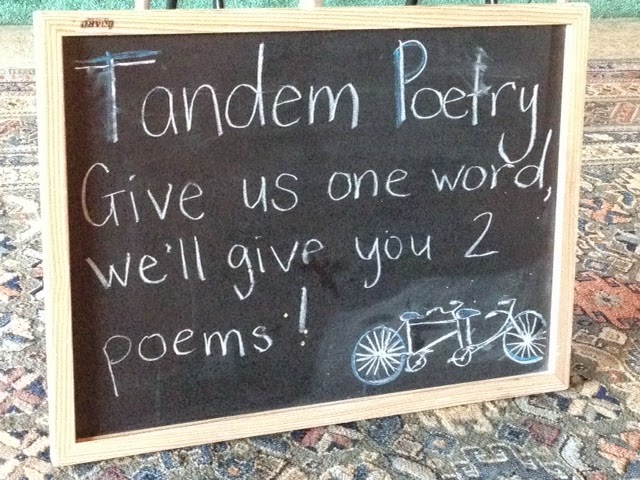 A hallmark of the Tandem Poetry tour is for Maya and Amy to ask participants to give them one word, then they each immediately begin typing out a poem on their individual manual typewriters for that person that is on based on their word. Knowing that the Brave Project would be launching soon, I was looking forward to their poems for "brave."

While I was disappointed I couldn't make it to their stop hosted by friends Lisa and Harry in Hastings, NE, I decided to catch them at their next stop in Friend, NE.   Photos from the Hastings gathering, showed adults in lawn chairs sipping glasses of wine while relaxing on a beautiful summer evening with the poets.  Since Friend's event was promoted by the Pourhouse wine tasting room, I made the leap that it would be a similar event.  Clearly I should have paid more attention to the blog post "Inspired by Strangers" announcing the event! But when I walked into the Friend's wonderfully restored historical building hosting the event, I was surrounded by 75 children decked out in balloon sculpture hats and surrounded by stations for ice cream, root beer and popcorn. I had walked right into a children's festival with Amy and Maya setting up their card table and manual typewriters up front.

What's a Brave poem seeking giant of an adult to do?

Get herself in line at the poetry table, of course!  Which, at the beginning had no children because they were each basking in their balloon sculpture, sugar-induced glory and not interested in poems.

But then they came.

And crowded in front of me.

None of them taller than my hip bone.

And since it was a children's festival afterall, I just let them shove their way to the front and waited patiently until Wilber teacher friend Connie came over to chat with me.

"Hi!  Which children did you bring today?" she asked expectantly.

"Oh... none.  Just me.  I didn't know it was a children's festival.  I just came for the poems," I said, hoping it wouldn't appear totally odd to be a poem chasing adult amidst children with sticky smears of ice cream and root beer on their cheeks.

Connie and I stood together and listened to poems written for "brothers" and " boing boing,"  - different words from the Hastings gathering to be sure - then I noticed Connie gently pull her grandson out of the kid table crowders and whisper urgently to him, "You let this lady go in front of you! She needs to get home to see her husband!" Ummm, didn't see that coming, but hey . . .whatever works.

Sigh.  Nothing like cutting in front of an 8 year old boy in line to get my poems!

So I kneeled down on one knee at the edge of the card table, at eye level with Maya and Amy, to be able to hear them read the poems they wrote for me above the din of children.

And oh how I love those poems!

It's fascinating to me that Maya and Amy could capture so much about the experience of those few minutes at the festival, as well as the intention behind the word I had chosen, with no conversation with me at all. And it's pretty cool to have a poem written just for you.

Part of the Tandem Poetry II Tour process, is to take a photo of each poem Maya and Amy write, then each author reads the poem aloud, hands it to you and moves on to their next word request.  Here are the poems Maya and Amy wrote for Brave, as well as their readings of them. (Note, Blogger is having trouble with spacing on these video clips, so you'll find Amy's poem at the end of this post. 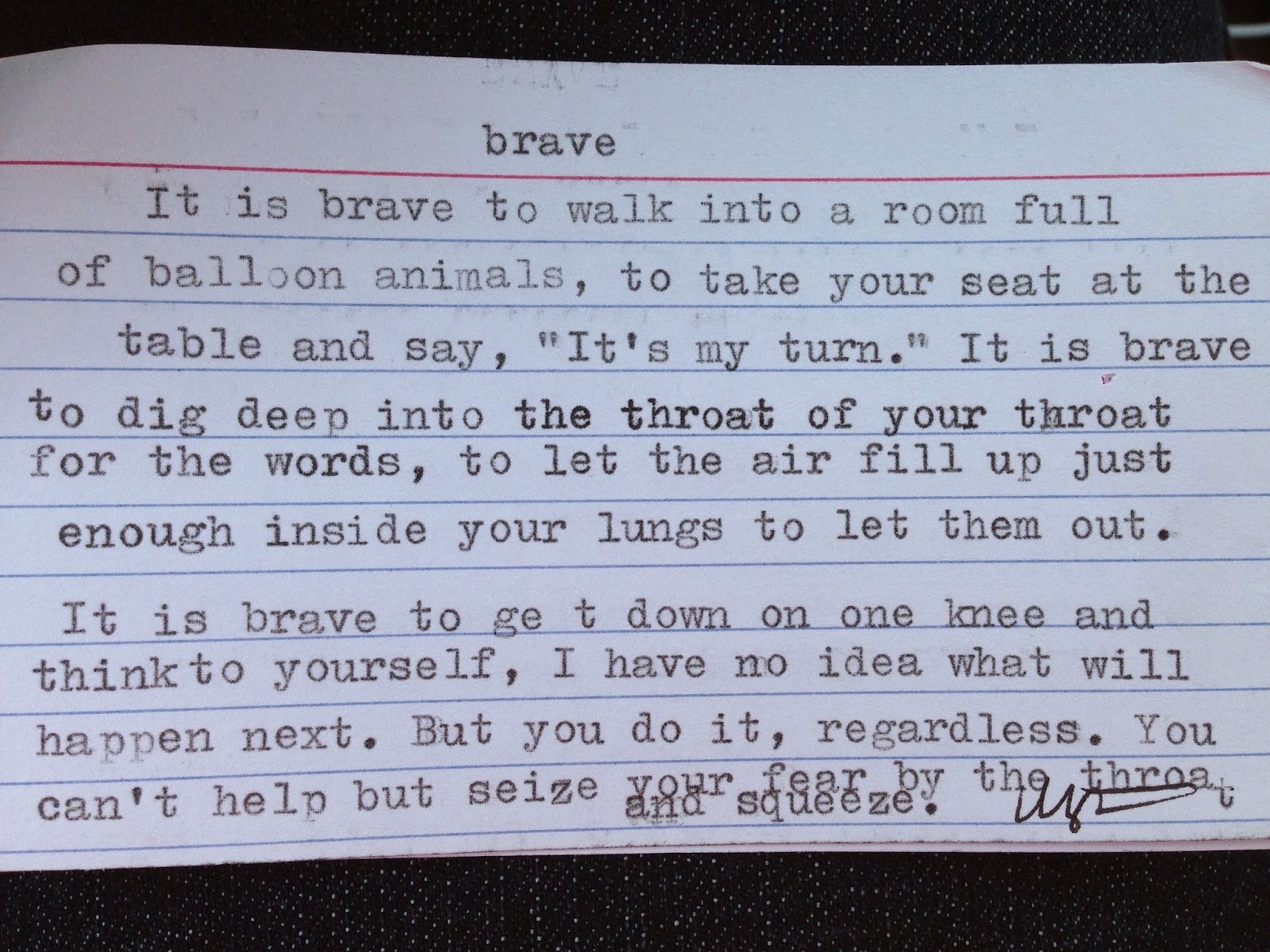 The poems and experience meant a lot to me, and I encouraged my friends, via Facebook, to attend the Tandem Poetry event that was to take place in Lincoln during the same weekend. One friend, Jason, took me up on it.  I was out of town that day, so we texted back and forth while he was at the library waiting for the event to start. When I asked him, he told me he had his words narrowed down to "marvel" and "wonder", and looked forward to his poems too.

But he didn't get them. Maya and Amy only got to write 3 poems, and had to pedal off to Omaha for their next event.

Knowing how much I loved my poems, that just didn't seem fair.

So, despite not having a type writer, and being a bit rusty on my poem writing skills, I decided that he should have his poems. Rather than write two poems for the same word, I wrote him poems for both words, then rolled my bike out of the garage, sat down on it and recorded them, then texted both the poems and my reading of them to him as a surprise. It was the launch of Ink Rider 1!

With his permission to share, here is one of the poems I wrote for Jason:  Wonder. 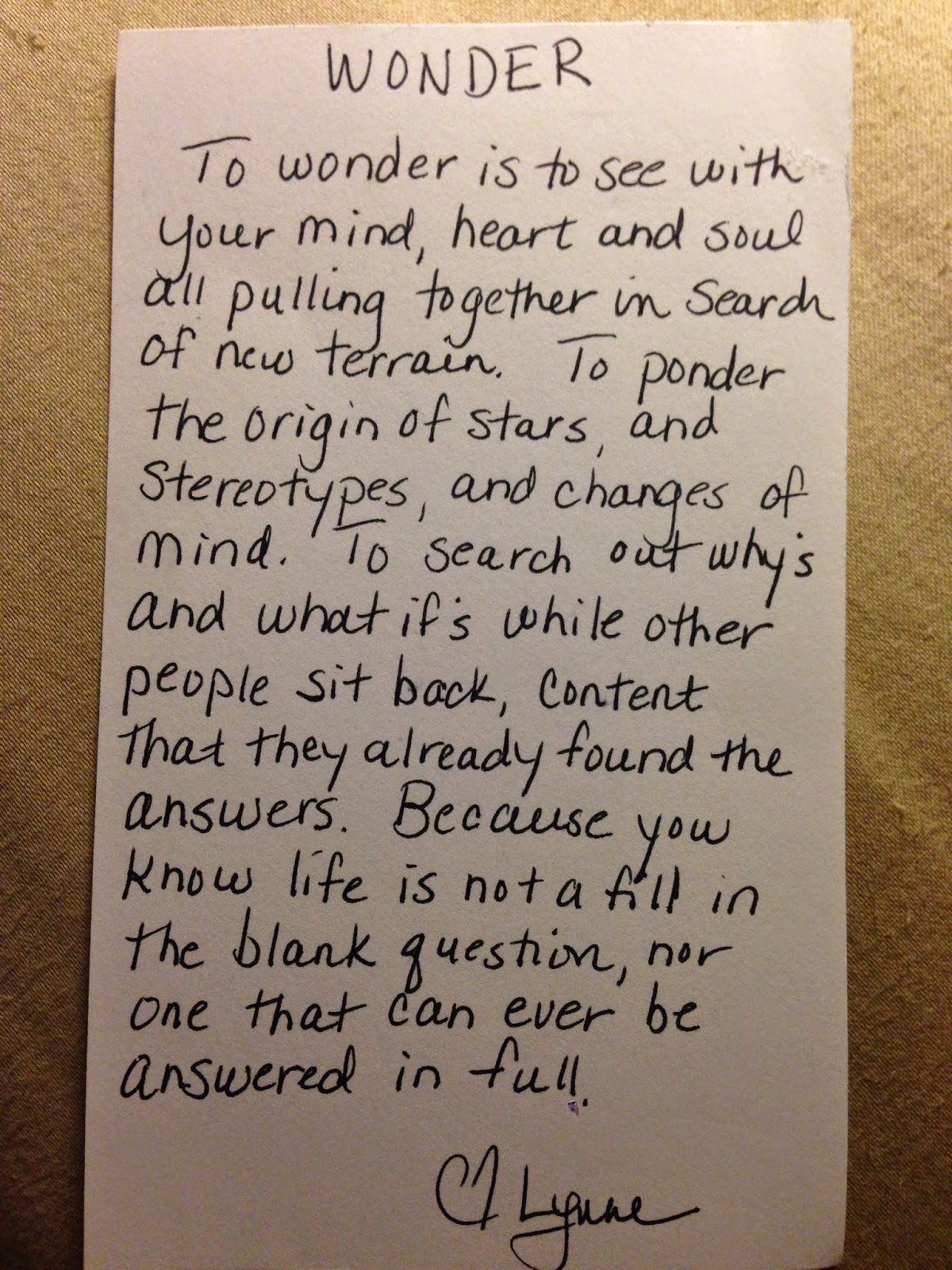 I've been wanting to continue Ink Rider I since the summer, but set it aside to do things like study the stars, search out songs appropriate for the Torch Singer class and progress on all of those immunizations I need for the trip next spring.  But recently, though, I decided it was time to get back to it, and asked my friend Jackie to think about her word and send it to me when she had chosen it, so I could see if I could still write "instant poems" or if Jason's was the Ink Rider I version of a one-hit wonder.

Again, with her permission to share, here is my poem for Jackie's word:  Grow. 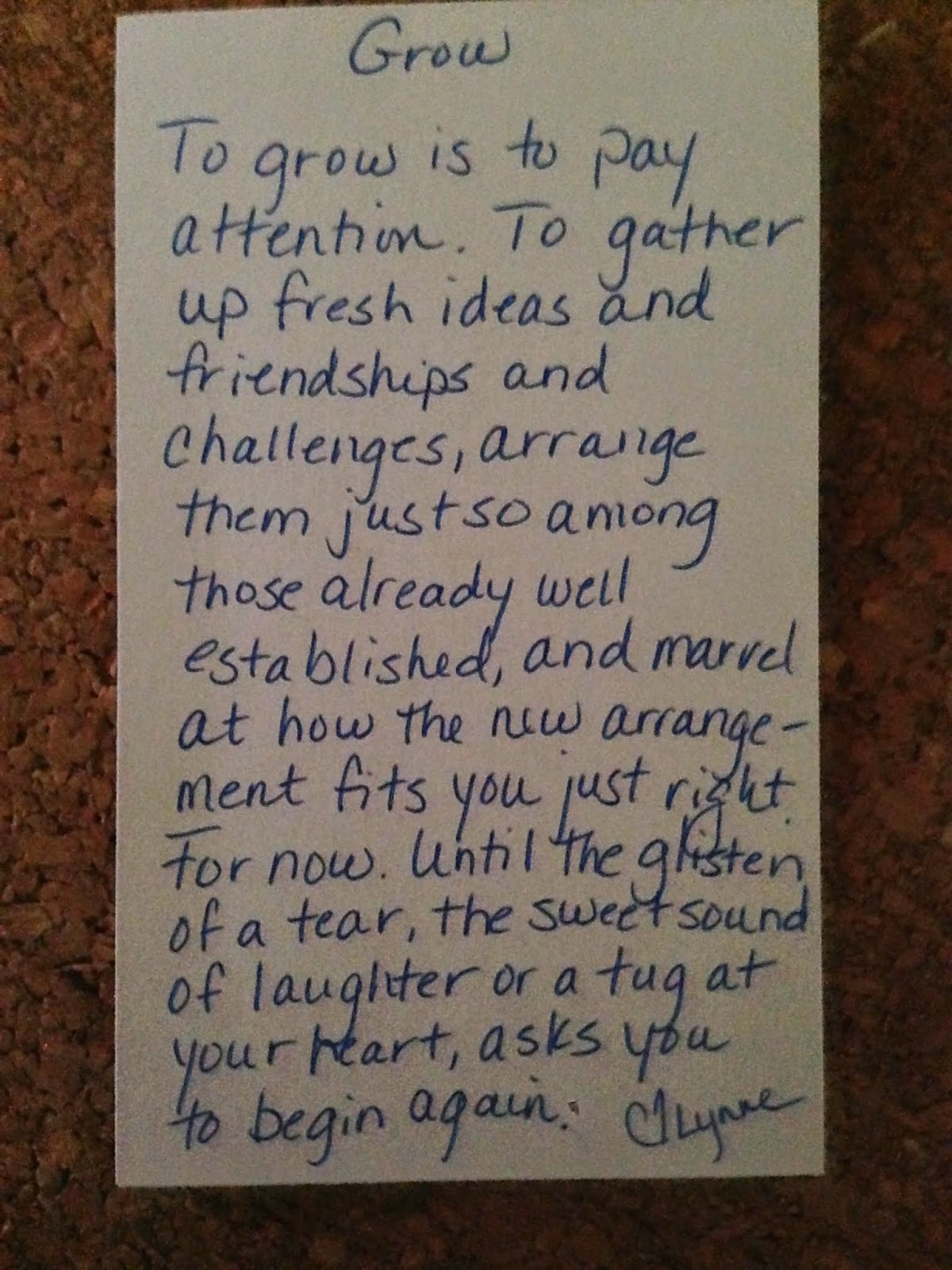 Next up?  Your poem.  If you'd like me to write a poem for you in the spontaneous, unedited, style that Maya and Amy modeled for me, leave me a comment with your word, and any background you'd like to share about why you chose it (optional). I'll do my best to write you a poem and share it with you over the coming weeks.  If you prefer, you may email me or text me your word, and I'll grab it from there.

Not sure you're a poetry kind of guy or gal? I'm fairly sure Jackie would never voluntarily trek to the library on a Sunday afternoon to hear poets read.  But she still likes her poem.  :)

So be brave. Send me your word. 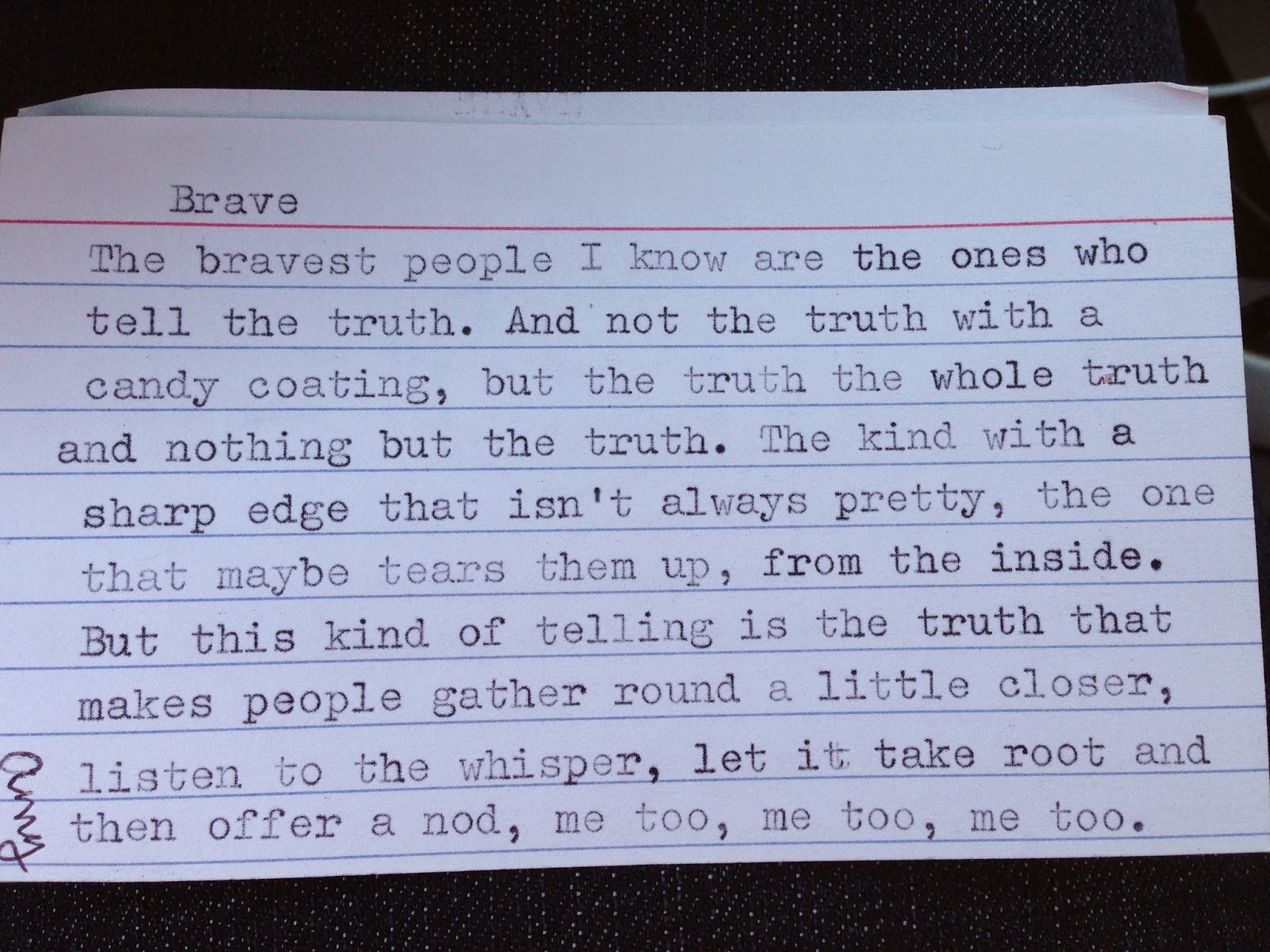