In my earlier post The Birth of the Brave Project, I identified some recent experiences that led me to develop the Brave Project that is chronicled through this blog. The actual plan, crafted over a Sunday morning cup of tea and 8 thoughtful hours in front of a computer, focuses on two areas: 1) What experiences could I pursue that would cause me to feel afraid or uncertain but, in doing so, would be likely to help me grow and learn both personally and professionally? and 2) What challenges would also give me the opportunity to contribute something to the lives and learning of others?  The result was a list of 10 challenges that fit either one or both of those criteria.

In September and October, I will be taking a class in Lincoln called Torch Singer 101, which culminates in a live show with backup band, stage lights and real microphones at the Zen Lounge in Lincoln.

I used to be able to sing pretty well.  All-state choir, leads in high school musicals, superiors on solos at district music contest, special music at church, etc.  I spent any free time I had during the school day hanging out in the music room singing songs from Fame and Flashdance with Susan Hall (now Susan Nelson-Knox), and loving every minute of it. This isn't earth shattering news to those of you who knew me when I was younger.


Those of you who met me after college might have your eyebrows raised wondering how you don't know that I sing.  That's because I don't sing anymore, mostly due to a medication that changed my voice and prompted an everlasting wave of singing insecurity.

When I was 22, it was discovered first that I had an ovarian cyst that needed to be surgically removed, and then that it was caused by severe endometriosis.  With help from friends Lori and her sister Terri, who was doing her residency at the Mayo Clinic, I was admitted there for surgery and follow-up treatment. In my pre-surgery visit, Dr. Webb, who was one of the world's best surgeons for endometriosis, asked me if I was an opera singer. Ummm, no.  "Because the treatment might have an impact on your voice." Well, I'm not sure I really understood the impact of what he was describing, but even if I had understood it, I would have proceeded anyway.
After surgery at Mayo, for which I will always be grateful as I believe the expertise of the physicians there have a great deal to do with me being able to eventually do my part to produce those amazing humans you know as Olivia and Eric, I was treated for most of the next year with a drug called Danazol, which unfortunately includes these published side effects, among others: weight gain, deepening of the voice or changes in pitch (sometimes irreversible), acne and mood changes.

Yes, all you parents of teens out there who just read that list - I was about to be thrust into a weird synthetic puberty for the better part of the next year. Boy Howdy was that fun!


At first, after the surgery and treatment, nothing was noticeable with my voice.  But one day, I opened my mouth to sing in church and Peter Brady's voice came out.  Remember that episode where Greg wrote a new song and was convinced all of the kids could make it big if they recorded it, so good ol' Mike gave them advances on their allowances to pay for the recording, but suddenly Peter's voice started to change?  And of course the deposit was non-refundable! What's a do-gooder family to do since they don't want to leave out their brother?  So Greg churned out a catchy new number, "When It's Time to Change, You've Got to Rearrange" for the Brady 6 that gave Peter a solo.

Yep, that's what I sounded like.  Peter Brady in puberty.

So I eventually stopped trying to sing, because the notes still sounded right in my head but they never made it out of my mouth sounding quite the same way. I was horrified. All of you who have music as an important part of your life can imagine the empty space it leaves when it's not there any more. But I had lots of work to do, babies to raise, classes to teach, a Ph.D. to finish. So life marched noisily on, with the singing of others as background music.

But I've always missed being able to sing, too.

Emily, the amazing voice teacher Olivia had in high school, tried her best to get me to work with her to get a workable version of my voice back, and she was confident I could do it.  But I had a long list of reasons why I couldn't do it:  I was too busy at work.  I was spending a lot of money on the kids' lessons for voice, piano, bass guitar, etc. I was still working on my Ph.D. I had laundry to fold. But mostly, I was just too afraid to sing in front of anyone because I didn't want to be embarrassed.  So I passed by the opportunity. Once you have done something well, it's hard to start over when you know it's just not going to go as well as it used to.  After that Peter Brady voice day in church, I stopped singing. Have never tried karaoke.  No singing in the shower.  No singing in the car. Mouthing the words during the national anthem. You get the idea. And still, I really missed it. 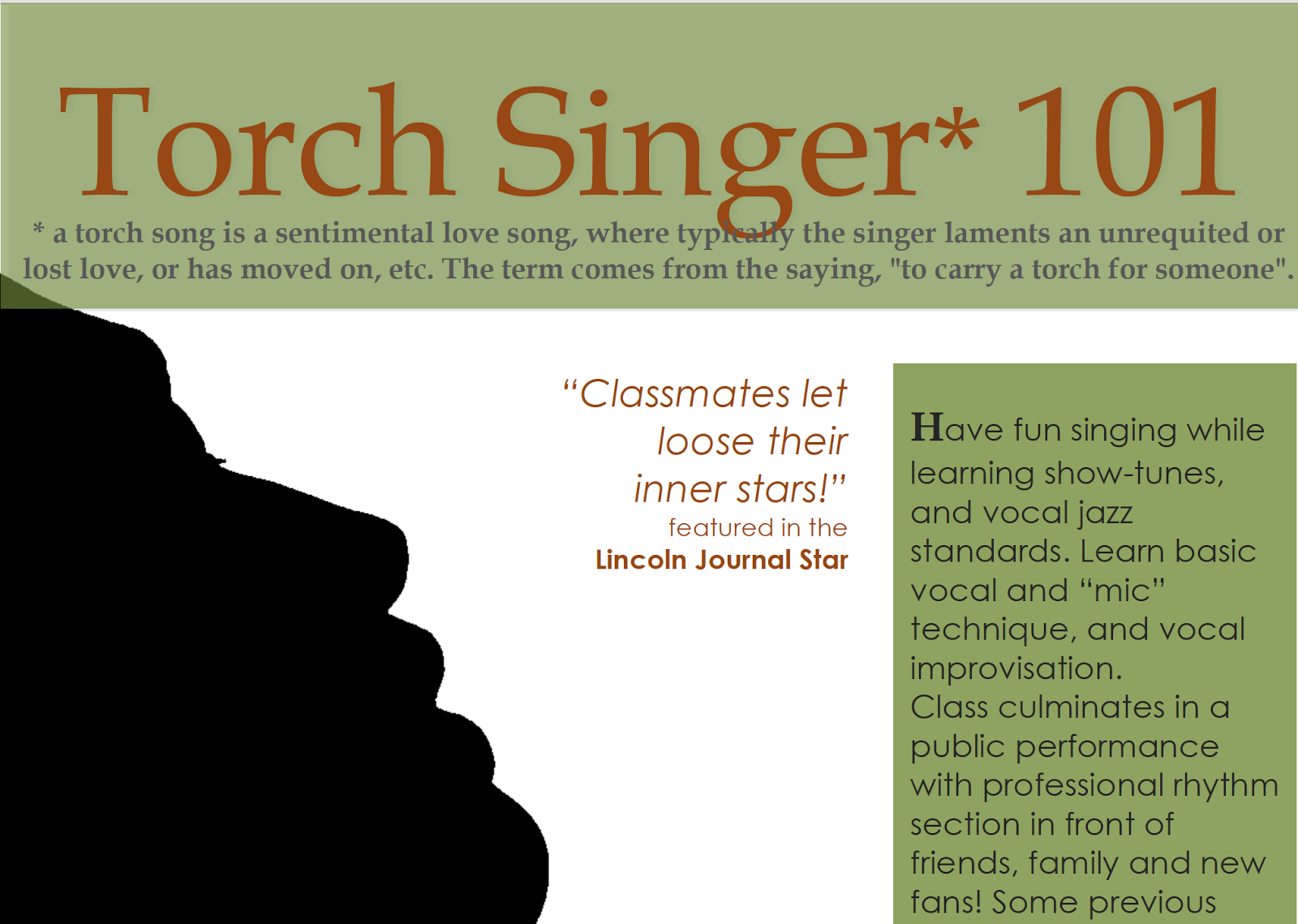 So . . . .a few years ago when I saw that a new Torch Singer 101 class was being offered in Lincoln, I thought it sounded interesting but doubted I could ever do it. For 6 weeks, students who are not singers but would like to pretend they are for one night, meet at the home of the teacher, who is a professional jazz singer, to practice up for the 2 numbers each person will perform in front of a live crowd at the Zen Lounge in downtown Lincoln. Apparently lots of folks have "lounge singer" on their bucket lists. Who knew?! 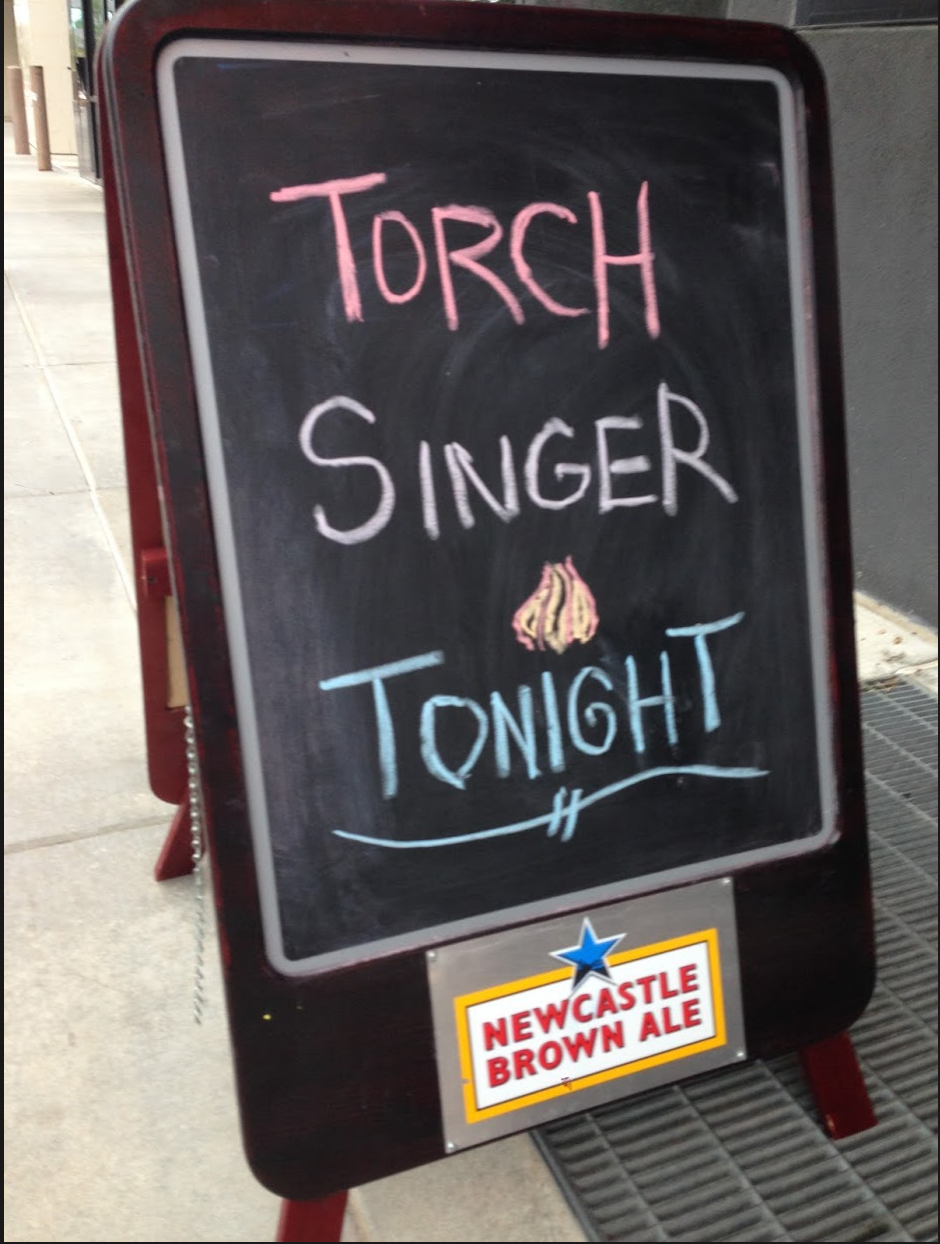 So what could be harder than standing in front of a crowd to sing 2 songs when you can't really sing any more?  Not much!  LOL! So it's on the list.

Honestly, it's one of the two challenges I've set up for myself that has me most anxious.  I've been to the show put on by the spring class, which was indeed performed by folks who aren't going to be the next American Idol, but who all survived the show still smiling, and were greeted by the kindest, more supportive crowd I've ever experienced. So I mailed in my registration for the fall class last week and anticipate the first class in September.  There you have it.  My family - all of whom have great voices, (Olivia even teaches voice) seem to think it will all go fine. That just because my voice is not soprano any more, doesn't mean I can't still sing. Olivia is even culling Youtube for Songs for Women With Low Register Voices (probably not what she put into her search box, but that's what she is looking for!) to help me choose what to sing. (My first choice is Gladys Knight's Midnight Train to Georgia, but I don't think we're allowed to have any Pips, and it wouldn't be the same without Pips!)

If I live through it, we will have proof that you can't actually die from embarrassment.


What activities or interests have you enjoyed at other stages of life that would be worth exploring again?  Or what have you always wanted to try but were too afraid of embarrassment to give it a shot?

What challenges do you have now to keep you from those interests and activities, and what steps can you take today to work around those challenges? 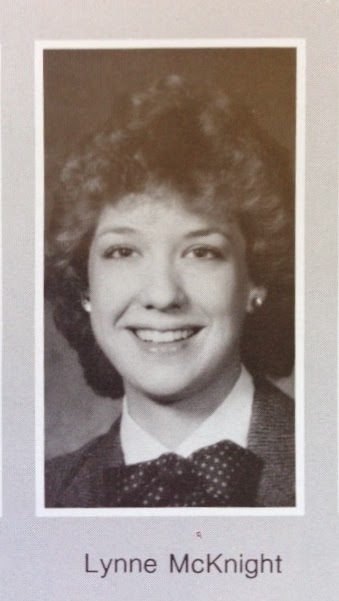 To find a photo from my past singing life, I pulled my yearbooks off the shelf for the first time in 20+ years.  Those of you who know my current flashy fashion sense won't be surprised to know that I wore the same suit and favorite silk bow for Homecoming, Senior Pictures and to portray a middle-aged Dean of Students in the school musical. Classic.
Posted by Lynne at 10:59 AM